TESTIMONIALS
We work hard to get testimonials from our customers.
We'll work just as hard to get one from you!

On two occasions my family and I have relied upon this family owned and operated moving company to care for our most prized possessions. The first move involved a long distance move due to the fact that we were dismantling a family home in Amherst and the contents had to be distributed among family members in HRM. This involved various items being delivered to three separate locations, no easy task. This was done with great care and meticulous attention to detail with everything being packed, transported and delivered  all in the space of one day. Further to this it must be noted that no job is too big or too small. Recently I needed to move an antique bedroom suite to another home in Dartmouth and again it was done with great care and concern. If anyone is looking for honest, prompt ,professional ,and dependable movers this company should be your first choice as they treat your possessions as if they were their own.

We’ve been using Bob The Mover for over 20 years to help us with our model home/staging activities. They treat me great and provide friendly, helpful and courteous service. They are on time and they are careful with items – meaning no breakage or damage. It is a pleasure doing business with them.

We have used these guys more than once and have found them to be pleasant, efficient and careful.  A move is stressful so knowing you chose the right company is the final piece in the puzzle.  We would not hesitate in recommending Bob the Mover to family and friends.

I hired Bob the Mover to move our law firm when we merged last year (2020). Since that time, I’ve rehired them on several occasions to move items within the office and to do a subsequent move. If you’re hiring a mover, try Bob’s out first. If you’ve ever moved before, you’ll notice right away the difference. It’s not about fancy trucks, glamorous advertisements and hard sales pitches. I want my stuff moved, on time, with due care, and for the right place. They do not overbill, they do not sit around, and they get the job done. In addition, they bring all the right gear. Also, there were several occasions where I, as an inexperienced customer at the time, did not consider everything in the move. Bob’s crew assisted me every step of way. I have recommended them to anyone that has asked.

I have done multiple moves with Scott, his father Bob and their crew over the years. I have known Scott professionally and personally for over 10 years and I would 100% recommend them for your next residential or commercial office move, without hesitation.

Scott and I have always bumped into each other at the Sportsplex Gym through the years, and I can tell you that he is one strong guy! More importantly, his team is personable, careful and respectful. My personal items and furniture were always relocated without a scratch. I have found their prices to be extremely reasonable as well. Bob the Mover has moved members of my extended family in the past on my recommendation. My mom loves him and my wife does as well. Book ahead. They are in demand.

Bob the Mover is an excellent moving company with top notch service. Bob the Mover is a family run business and they really do care. Scott and Kenny were onsite with their team to make sure things move smoothly and that your possessions are taken care of from point A to point B. They really are amazing!! No job is too big or too small. 10/10 for customer service.

I also hired them to disassemble and move and then reassemble a number of cubicles in our office. Their team was professional, efficient, and took great care to make sure the cubicles were put back together properly. We were very happy with their service and would hire them again!

I hired Bob the mover for me twice now and if I were to move again, I would most definitely hire them again! They were personal and efficient. They arrived on time, got right to work and smiled the whole time. They were very careful to ensure that there were no damages to walls, flooring and my furniture. They helped everything go smoothly and I would recommend them to anyone!

We’ve moved 4 times in 6 years as our family grew and the search for the perfect home continued. Scott and the crew are dependable, reliable, polite, friendly, full of strength, cautious, fast, and fairly priced. We used them each time and if we ever decided to move again it would be our first call.

Thank you ‘Bob the Mover’ and crew! Our family couldn’t be more appreciative for taking one piece of the stressful moving day and making it enjoyable. Great chats, and laughs! Thank you for delivering our belongings safely and unscathed!

Bob the Mover has moved many people into our high-rise apartments and has moved people out to other locations. They are recommended by the management here to call if you are changing your location. They can handle jobs of any size and are quick and efficient. A good mover to call whether moving from a home or an apartment.

I have known Scott and his father Ken for almost 30 years. They are 2 of the hardest working people I know and take pride in their work. Moving can be a stressful time for many people but they make it look easy and have fun while doing it. My family has used their services on countless occasions from full house moves to basic appliance moves and everything in between. They get the job done as efficiently and professionally as possible. Not to mention their rates are the best in town!  I have recommended them to many people over the years and I always hear what a fantastic job they did. Do yourself a favour and book them for your next move!

Sharon and I have used Bob the Mover three times in the last 6 years. After the first move we did not even bother to consider another mover. They absolutely take the "stress" out of moving. Friendly, humorous, hard and fast working, economical and with an attitude of just ask, we will do it. Our first move was from our home in Dartmouth, and we divided some of the contents between a Dartmouth apartment and our summer home on PEI. The move was in February and the boys drove the PEI stuff in minus 25 below weather, with winds blowing so hard they had to wait 4 hours at the Confederation Bridge because it was closed to trucks. All in a day’s work for them, over and back, even in the cold!! Scott's our man!

We moved into our house 22 years ago and over the years have recommended Bob the Mover and his crew to many people and wouldn't hesitate to in the future.  We have also had them come to our home a couple more times over the years to move some large pieces of furniture from one level to another.  The whole crew working is always very professional, clean and very easy to deal with.  We even have a few laughs whenever they are here. They are always very accommodating and were able to fit us in for a small job, to them...but a big job for us.  We wouldn't think of calling another mover and I'm sure will use them again in the future.  Thanks again for a great job and taking the stress away!!

Moving day is stressful but come moving day Bob The Mover take the stress out of moving. Doug and I have moved many times in the last 40 plus years and moving with Bob the Movers was the most pleasant move we have ever had. These guys are pleasant, listen to your concerns and they are there until the bitter end of moving day helping to put things together and exactly where you want your things placed without a dent or a scratch! We highly recommend this moving company they are simply the BEST! 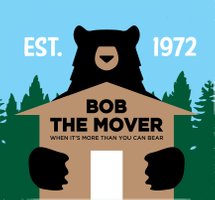